184 of the 204 officer cadets were from the United Kingdom, whilst the remaining 20 were from overseas. 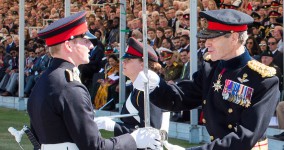