The Sandhurst Trust seeks to promote a Serve to Lead ethos and esprit de corps by preserving the Academy’s heritage, supporting officer cadets and alumni, and in promoting the Army’s approach to leadership.   In addition to providing grants for adventure training and financial support to those in need, organising reunions and leadership encounters, the Trust wishes to add further value to the Academy and contribute to leadership development and practice.

We are in the early stages of scoping a ‘Leadership in Action Project’, which seeks to identify and celebrate the iconic leaders of the last 50 years who have commissioned from RMA Sandhurst and gone on to exemplify the Serve to Lead ethos for which the Academy is so famous.  It is envisaged that individuals would include a broad range of regiments, at least one reservist and some from overseas.  Their success would not be limited to military activities.  Possible subjects include: Lt Col H Jones VC, Sir Charlie Mayfield (former Chairman John Lewis), Capt Gavin Hamilton MC, HM King Hussein of Jordan and Maj Tim Peake.  But I seek your views on who you would wish to be celebrated in this way; you will have a much better perspective on leadership achievements post Sandhurst than we will.

Eventually the products of this research are envisaged to be:

We have no illusions about the scale of the task we are contemplating, in our estimation this will take at least 5 years to complete and will require some dedicated resource, both paid and volunteer; sponsorship and perhaps fundraising will eventually be necessary.  For now, I merely seek your perspective on the proposition and especially your views on who we ought to be including in our research.

Please email your nominations to the Director, Vaughan Kent-Payne - director@sandhursttrust.org 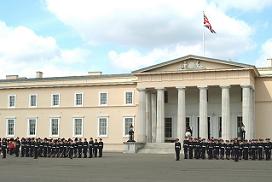