On 19th May, Gen Lord Richards, The former Chief of The Defence Staff, delivered a leadership presentation to a mixed audience of Trust members and cadets.

The event was held at RMAS in the Woolwich Hall with an audience of around 300. Lord Richards not only gave an insight into the challenges of command in Sierra Leone, Iraq and Afghanistan but the additional responsibilities of the political dimension of current operations. Like any good presentation, there was something for everyone and he illustrated his talk with examples of leadership from history with quotes from a wide range of commanders including Napoleon and Colin Powell. The general fielded an hour of questions on a variety of subjects from an audience ranging in age from a Trust member at 86 to a cadet from Eton College CCF aged just 16. 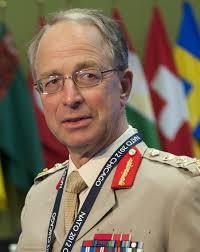